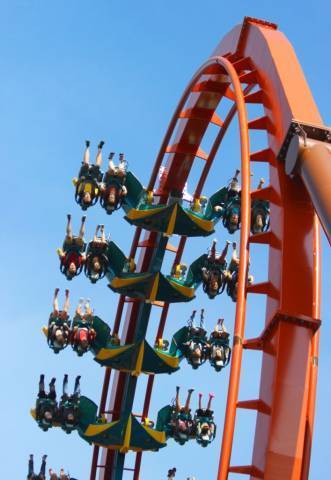 SANTA CLAUS, IND—–Buying a new home can be a “roller-coaster experience” and during Thursday’s episode of House Hunters, the buyers take that phrase literally, with a ride on Holiday World’s Thunderbird.

“When the producers of House Hunters asked us for a tour of the park, we couldn’t wait to offer them a ride on Thunderbird,” says Holiday World’s president, Matt Eckert. “The home buyers – Tom and Terri – didn’t hesitate; they rode over and over. In fact, they spent two days with us.”

House Hunters, which has aired on HGTV since 1999, takes viewers through the process of selecting a new home, featuring the buyers’ top three choices. Thursday evening’s episode will reveal which house in the town of Santa Claus will become the empty nesters’ new home.

The “Tom and Terri Seek Home in Santa Claus, Indiana” episode of House Hunters premieres on HGTV at 9pm CST (10pm EST) this Thursday, with a re-run on Christmas Eve. HGTV is available in approximately 96 million households nationwide.