Oh, heavens – what a cookbook!

Did you get a chance to browse through Hevron’s Mercantile this season? 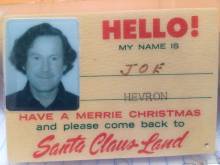 If you’re a regular HoliBlog reader you’ll recognize our new shop’s name as belonging to our longtime employee (and dear friend) Joe Hevron, who passed away in 2011 after working at the park since we opened in 1946.

That’s right. Joe began his career in 1946, our first season. (I’ve just learned he was our first popcorn popper.) That was back when we were called Santa Claus Land. Joe had just finished high school, and other than serving his country during the 1950s, he never left.

In May, members of Joe’s family gathered with us to honor him, share some sweet – and funny – stories, and cut a ribbon to officially dedicate Hevron’s Mercantile. 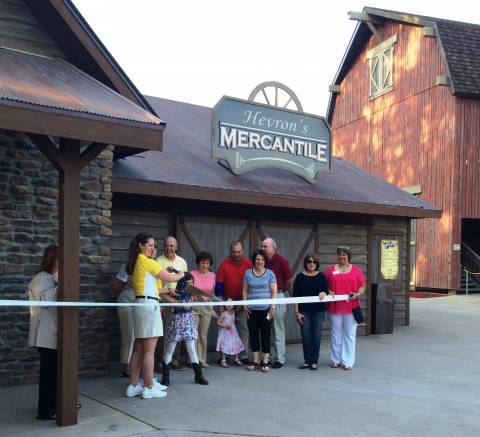 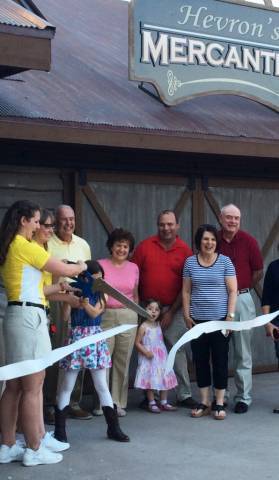 We used the traditional “big  scissors”; Leah and Lauren asked for help from a young Hevron family member.

For the ribbon, we substituted something Joe used a lot of during his long tenure with us – adding-machine paper. (He probably would have wanted us to gather up the scraps and use them. He was a practical fellow. Oh, and he also would have been mortified that we named a shop after him – but we all agreed that Joe would have been pleased to know that we cared for him so deeply.)

Joe’s descendants shared their family cookbook, “One hundred seventy-five years of Recipes and Reflections,” with us to make available in Hevron’s Mercantile and now, on the HoliShop. (We thought they were all gone, but found 10 more, so if you’d like one, please order it soon.)

Flipping through the cookbook is a charming trip back in time, as the recipes are peppered with narratives from several generations. Alongside ingredient lists for Pumpkin Pie, Prune Pie, Rhubarb Pie and even Vinegar Pie (!) are stories and photos from generations ago.

There are even Civil War-era recollections handed down. Joe’s home place was in Lincoln City – in fact some of the family’s property is now part of the Lincoln Boyhood National Memorial.

As we planned our evening to honor Joe, we knew – since he loved his sweets! – we’d need to serve cake. It featured a photo of Joe as engineer on the Santa Claus Land Railroad train (you may remember it as the Freedom Train) and his favorite phrase, “Oh, heavens!” 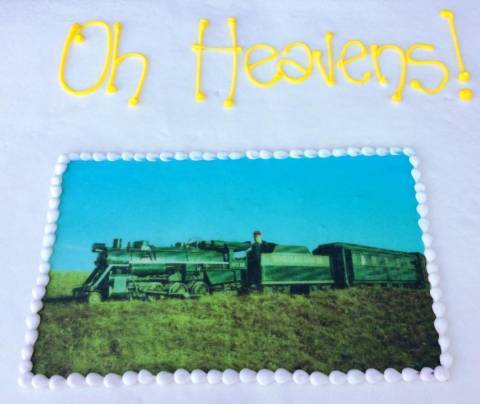 If you’d like one of the “Our Lincoln Heritage” cookbooks, please order soon, as there are only a handful left (and I’m getting ready to purchase some for Christmas gifts).

3 Responses to “Oh, heavens – what a cookbook!”