SANTA CLAUS, IND.—– Hundreds of roller coaster enthusiasts from around the world will flock to Holiday World & Splashin’ Safari this Wednesday and Thursday as part of the American Coaster Enthusiasts Coaster Con XXXIX. 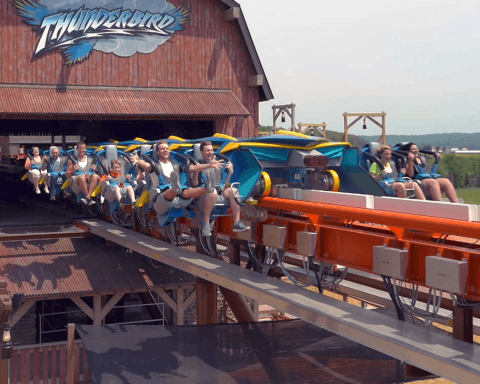 Park president Matt Eckert says the ACE visit is expected to coincide with an important milestone. “By happy coincidence, we expect Thunderbird to launch its millionth rider sometime Wednesday afternoon,” he says. “We’re planning the commemorate this special ride by providing the trainload of riders mementos of their flight.” Thunderbird, which opened last season, is the nation’s only launched wing roller coaster.

During their Coaster Con, the American Coaster Enthusiasts will name The Raven, Holiday World’s 1995 wooden roller coaster, an “ACE Roller Coaster Landmark,” a designation reserved for coasters of historical significance.

“The Raven was very trendsetting in its time,” says Tim Baldwin, ACE’s communications director. “Following years of coaster wars, where amusement parks tried to outdo one another, Holiday World showed that a modest-sized ride can still be truly fantastic. This amazing wooden coaster in a wonderful forested setting achieved national fame when it opened in 1995. It helped launch this small-town park into bigger and better things. Just look at Holiday World now. The growth of this great park is marvelous, just like their original wooden coaster.”

The ACE Roller Coaster Landmark ceremony will take place Thursday at 11am CDT in the High Dive Theater. The ACE Coaster Con will also include “exclusive ride time” on the parks’ roller coasters, water coasters, and other attractions both before and after the parks’ regular operating hours.