SANTA CLAUS, IND — Full-time staff from Holiday World froze in place this morning for a mannequin video designed to drop dozens of hints about the 2017 season. 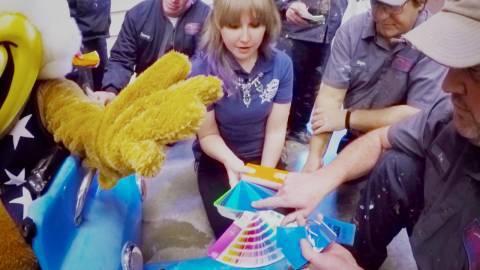 “Hints and ‘Easter eggs’ are everywhere in the video,” says park president Matt Eckert. “By carefully watching the video, viewers will learn that we plan to restore a classic flat ride and name it Firecracker.”

Firecracker is a Calypso ride, one of only a handful still in operation nationwide. The vintage ride will be restored with a patriotic theme and will be located across from Liberty Launch in the park’s 4th of July section.

“Firecracker is a distant cousin to our Scarecrow Scrambler ride,” says Eckert. “The difference, though, is that there are 16 cars which will hold two riders each – and the ride platform is on an angle. It’ll be a great family ride and a wonderful addition to our collection of classic rides.”

Firecracker’s story began in 1972, when it was a new ride at LeSourdsville Lake Park near Cincinnati. That park shuttered in 2002 and the ride was eventually moved to Fun Spot in northeast Indiana, which closed in 2008.

Other projects for 2017 include:

Additional projects and improvements will be detailed in the next Holiday World Podcast episode, which will be available on Friday.