Home // HoliBlog // Its about action

It’s not about where you were born. Or what powers you have. Or what you wear on your chest. It’s about what you do … it’s about action. – Superman

Yesterday afternoon, the Easterseals Rehabilitation Center in Evansville raised more than a million dollars during their annual telethon.

We have a special tie with the Rehab Center. We’ve hosted Play Day with them for 25 years and at the same time raised (and donated) more than $400,000 to help ensure that no one who needs their services is turned away.

Some of the Play Day funds from the past few years have gone toward this wonderful therapeutic playground for pre-schoolers. 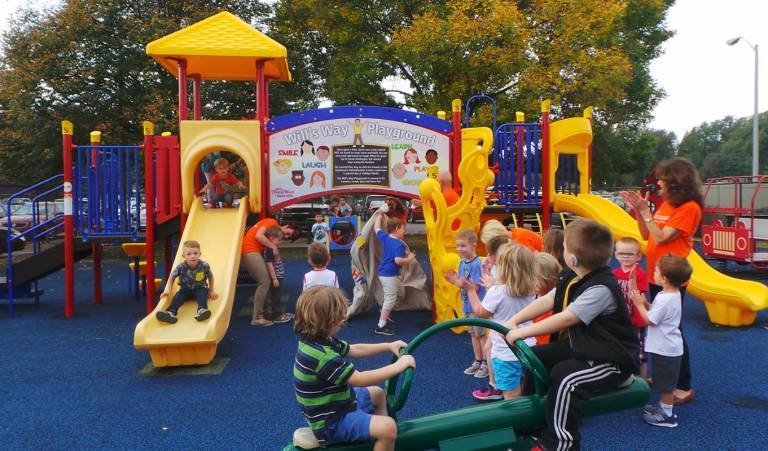 The playground is named Will’s Way Playground in honor of the late Will Koch, our longtime president and friend, who green-lighted Play Day so many years ago. 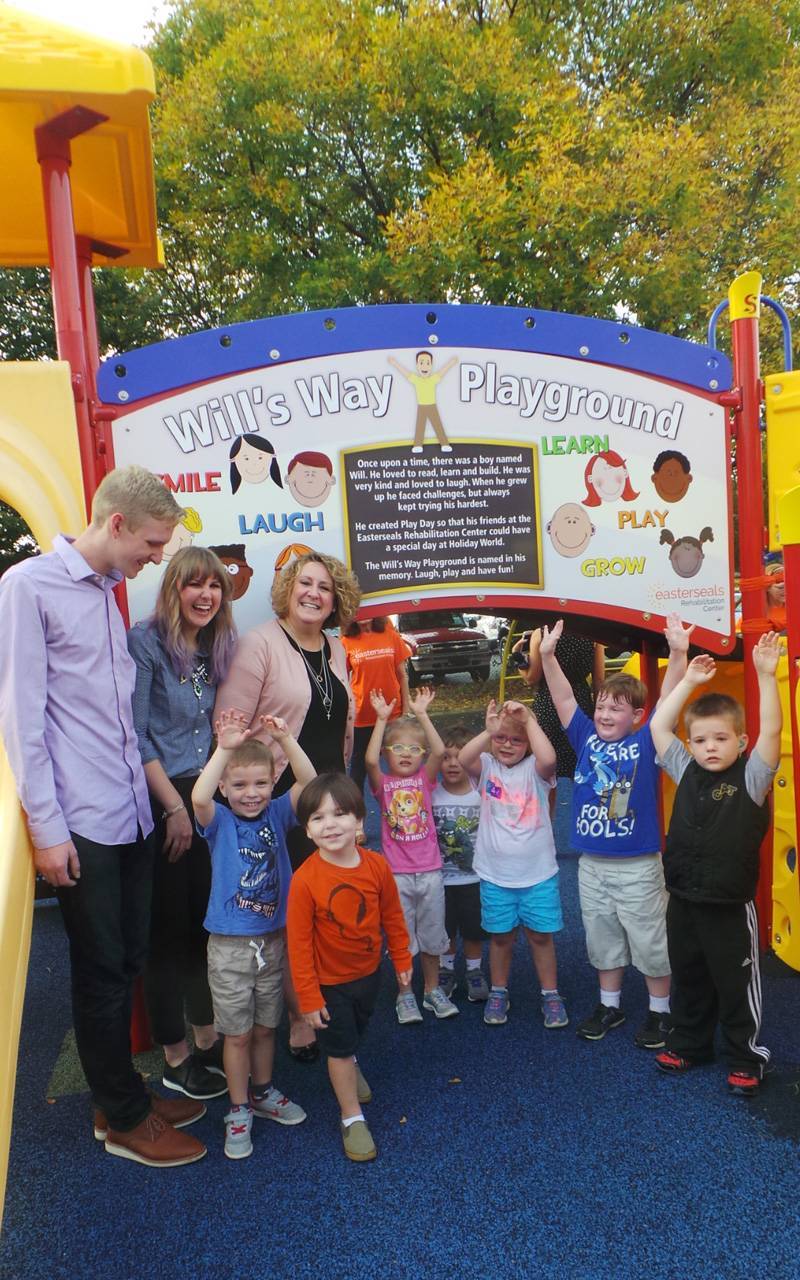 That’s Will’s family, laughing with some of the children (from left, William, Lauren, and wife, Lori; daughter/middle-child Leah is working on her MBA at I.U.).

Lauren made an appearance on yesterday’s telethon. (No, that’s not some bad filter; this photo was taken while standing in front of my TV screen at home.) 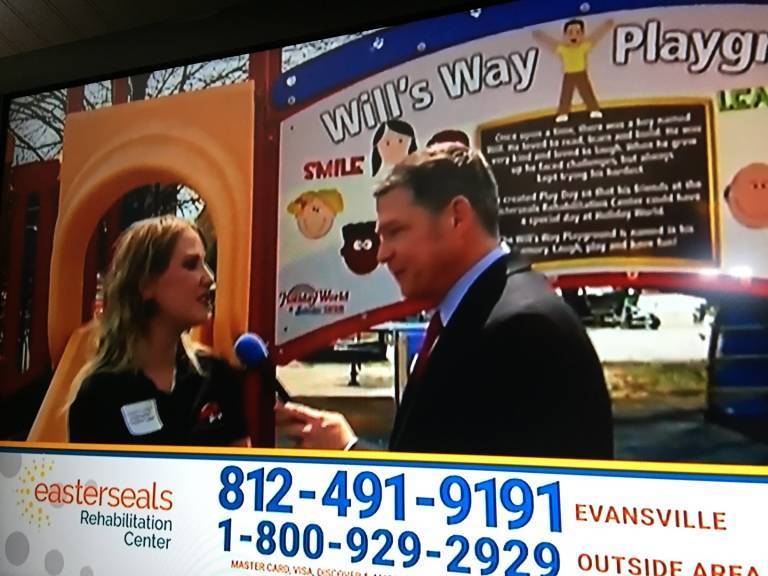 Lauren was presented with the Mayors Award by an extra special fellow – Andy Imlay.

Andy worked here at Holiday World seasonally from 1999 to 2003. In fact, he was our first IT intern. (I must add that I have a clear memory of Andy boisterously asking me “NOW what did you break?!” as he entered my office one morning. Cheeky fellow, that Andy.)

This spring, Andy was chosen to be the Easterseals Adult Ambassador. And that’s his fiancee in the photo. Oh, and Wayne Hart from WEHT-TV, the station that hosts the telethon each year. Thanks for the beautiful weather, Wayne! 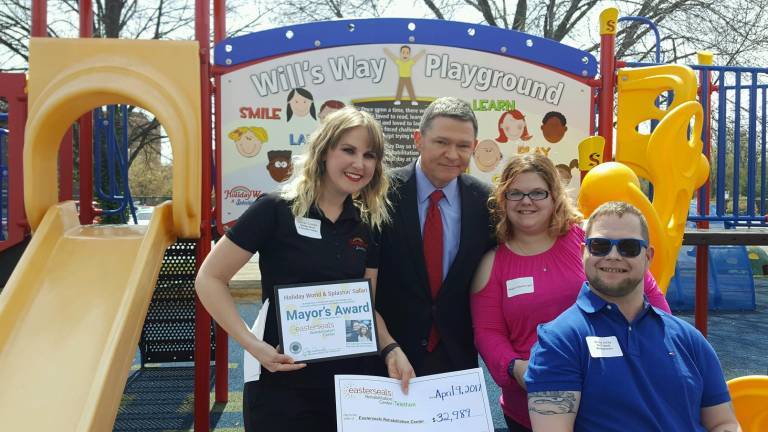 WEHT produced a video about Andy that brought tears to my eyes more than once. (Watch it to “get” the Superman reference from above.)

In case the video choked you up, let’s end this with a smile.

Last fall, when the Will’s Way Playground was dedicated, several of the children were fascinated with the microphones and cameras.

This fellow in particular, captured our hearts: 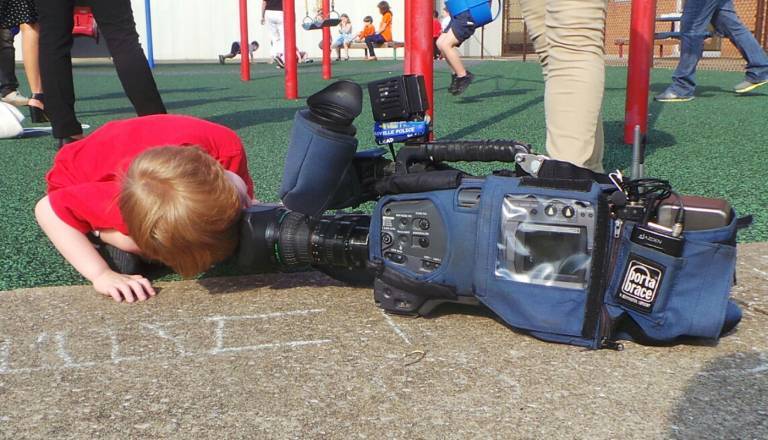 And – one more for you, Andy – let’s close with another Superman quote: Dreams save us. Dreams lift us up and transform us. And on my soul, I swear … until my dream of a world where dignity, honor and justice becomes the reality we all share – I’ll never stop fighting. Ever.