Home // HoliBlog // Firecracker: Before After

It’s so exciting this time of year to see our rides come back to life.

And it’s extra special to see Firecracker, since it had been sleeping for nearly a decade.

Here’s a photo from last fall, when our crew traveled to northern Indiana to disassemble the ride, which had been SBNO* since 2008. 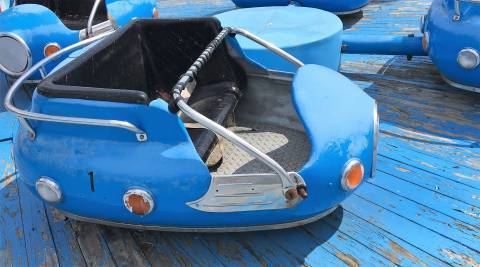 The story of this classic ride starts in April of 1972, at LeSourdsville Lake Amusement Park near Cincinnati.

Called simply “Calypso,” this ride delighted untold thousands from 1972 to 2002 when, sadly, the park closed permanently.

A few years later, Calypso was moved to Fun Spot in northeast Indiana, where it remained after the park shuttered in 2008 until 2016, when we purchased the ride with plans to restore it.

*By the way, SBNO means Standing But Not Operating.

This afternoon we got a call that Tony was operating Firecracker, so we headed that way and went live on Facebook:

There’s still some work to do on Firecracker and throughout the park. But rest assured we’ll be ready to go at 10am CDT on Saturday, April 29!

Still need tickets? You can save up to $20 per ticket with our new Pick Your Price online ticket deals!

4 Responses to “Firecracker: Before & After”