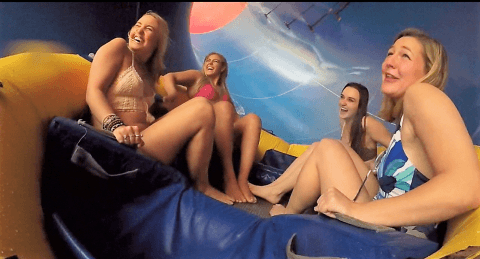 “The Travel Channel contacted us, wanting to explore the Linear Induction Motor technology used to propel boats up the hills on Mammoth and Wildebeest,” says the park’s president, Matt Eckert. “Mammoth is featured in the Guinness Book of World Records as the world’s longest water coaster, and Wildebeest is a close second. Together, they helped us win the #1 Water Park spot in a recent USA Today poll.”

The Travel Channel selected a group of twentysomething friends* from Louisville to feature in the episode, which was shot in Splashin’ Safari in late May.

Holiday World will live tweet during the show with behind-the-scenes Mammoth and Wildebeest facts and commentary about working with the Travel Channel cast and crew. The “Primal Fear” episode premieres on the Travel Channel at 11:30am CDT (12:30pm EDT) this Sunday, July 30, with re-runs in September. The episode is already available to watch on iTunes.

Travel Channel is the world’s leading travel media brand, and is available in over 89 million U.S. cable homes.