There’s a long-running joke among coaster enthusiasts that all worthwhile rumors about parks come from … The Dippin’ Dots Guy. Because nearly every park sells that beloved treat and nearly every park has secrets to keep.

For today’s podcast episode, we got The Dippin’ Dots Gal – Billie Stuber – on the horn and learned all about Dots – past, present, and future:

We started out the morning the right way:

Those Dots were packed in dry ice (also a treat to anyone with STEM interests) and were ready to enjoy: 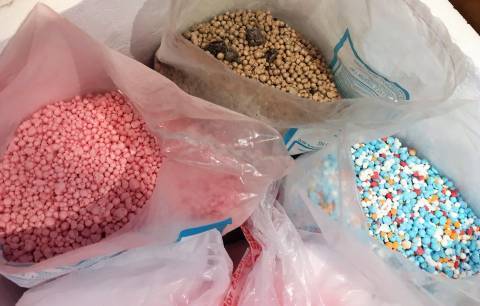 You want to enter our We Love Dippin’ Dots sweepstakes don’t you? Be sure to enter daily.

So now you really want to work here, right?

Yes. Hello. I am putting in my application for the official Holiday Word Dip & Dot taste tester. I can start any time. Thank you.

Yes, of course you do. Here’s where to see which departments are hiring (full-time, too): HolidayWorldJobs.com

Here’s our Thunderbird Launch video, as we swapped out trains last week, with just 100 days till opening.

And. bless her heart, here’s little June’s video. We hope she eventually forgives her mommy!

E-auditions are now open for Rock the World, our Christian Music Fest coming up on August 25.

And, if you want to experience our friendly Twitter War with Cedar Point earlier this week, start here:

When the topic turned to holidays, we caught a groundhog nibbling on the mayor’s ear in Sun Prairie, Wisconsin:

@HolidayWorld hoping y’all have a good “Groundhog Bites The Mayor Day” tomorrow! This happened in our neck of the woods a few years ago #HoWoPo https://t.co/nUAaDyp6jK

Stephen made this new Facebook “frame effect” for Valentine’s Day:

And this reminder, if you’ve been meaning to sign up for Easy Pay for monthly payments for Season Passes or Platinum Season Passes, the deadline is coming up on February 15.

In #HoWoPo Feedback, we got a lesson about the true, pure Wisconsin accent:

@HolidayWorld that is not how we talk in Wisconsin. That being said, just about everything else about the SNL Action News for Fond du Lac skit was dead on, lol. #HoWoPohttps://t.co/9z2iLWgTYb

Take a look at the great coaster designs developed by 6th graders in Mt. Vernon.

We heard from some excited fans who are counting down the days until HoliWood Nights. Do you want to join us? Be sure to sign up for one of our partners clubs here on our HoliWood Nights page, as it’s a “members only” event.

We oohed and ahhed over Johnathon’s bacon dish

@HolidayWorld Seems like every time I listen to #HoWoPo I end up heading to the kitchen and cooking something involving #bacon. pic.twitter.com/uF3cziiqiC

Oh, and The Coaster Crew gave us a lot to talk about:

Ok, all together now! It’s rehearsal time for our #NationalKazooDay concert later tonight. If we do well, maybe we can have our own show at @HolidayWorld! Sam was a little confused and invited The Great Gazoo. #HoWoPo pic.twitter.com/emTo545wja

I was trying to fix a healthy side dish for #EatBrusselSproutsDay but someone thought they could be put to better use! Could this holiday be an idea for a new themed area at @HolidayWorld? #HoWoPo pic.twitter.com/Ti2MVw7Nbb

I didn’t get to tell my Brussel sprouts story: Shortly after we were married, some of Gary’s relatives dropped by from Louisville, with the makin’s for supper. Including frozen Brussel sprouts.

Gary eyed them with suspicion. Getting ready to steam them, I whispered, “Don’t worry, they’re just like little cabbages.”

My cabbage-loving husband has never forgiven me for that trick.

Maybe we just need to use Matt’s recipe:

Matt’s Brussel Sprouts
Basically, you take about 24 Brussel sprouts, cut off the stems and loose leaves. Shred them. Fry bacon until it is crisp. Take bacon out and then saute about 1/4 cup of onions and 3 or 4 cloves of garlic until the onion is soft. Then add the sprouts. Add a couple tablespoons of lemon juice, and salt and pepper to your liking. Then add the bacon back in and stir until sprouts are softened. Sometimes I will add a few splashes of soy sauce or teriyaki sauce for a little kick.

Thanks for joining us for this, our 51st episode. Please be sure to subscribe (and maybe even leave a review, pretty please?) on iTunes, Spotify, Stitcher, and more!