A slide on the move

James called shortly before one o’clock. The first pieces of fiberglass slide were about to be put into place at Tembo Falls. I didn’t want to miss this! I’d invested too much time making sure to capture their assembly to not show up for the delivery to their final destination!

This is the first of Tembo Falls’ eight junior slides – our newest addition to Splashin’ Safari. They’ll be situated right beside Tembo Tides, a new junior wave pool, between Kima Bay and Wildebeestro.

I wasn’t ready. Literally. I didn’t have a high-visibility safety vest, and I couldn’t enter the construction site without one.

After a mad dash, I had my hard hat and borrowed a vest

It was time to get the photos that we’d been looking forward to seeing all winter.

I got there just as the first slide piece arrived on site and made my way to the upper deck of the Tembo Falls platform to get photos. All three pieces of Slide #1 were ready to be lowered into place. Apparently, I even made a cameo on our webcam! 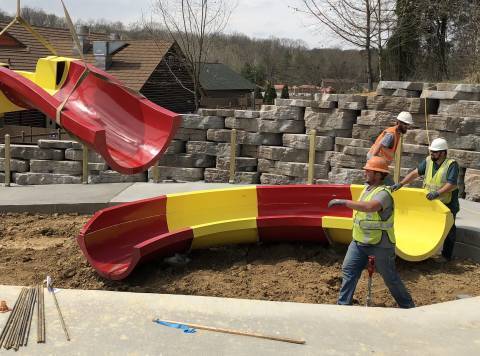 The crew was great. They even moved a piece of heavy equipment to help me get a better photo.

The weather hasn’t exactly cooperated during construction, but the past two days have been absolutely beautiful. I know our construction crew appreciates that. They deserve that!

Here’s hoping that they have plenty of sunshine in their near future as they work hard to get Tembo Falls ready for the season!

As for me? I think I’ll sit down and try to catch my breath. 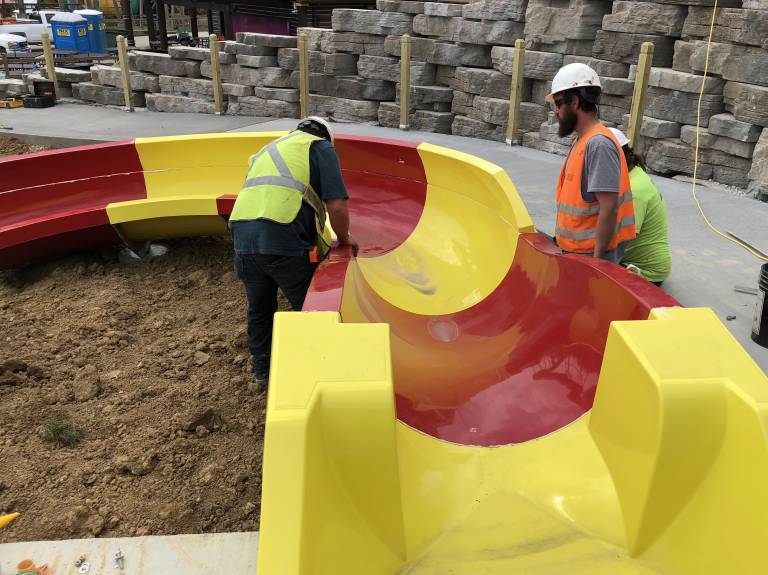 6 Responses to “A slide on the move”