“Absorbant and yellow and porous is he” has to be one of the best cartoon theme-song lines ever written.

It was so sad to hear that SpongeBob SquarePants’ creator passed away yesterday. Stephen Hillenburg was just 57. 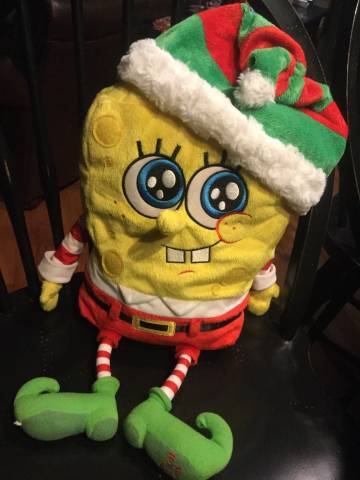 Thinking of SpongeBob took me back to the summer of 2002, when a plush version of the gap-toothed goofball was a highly sought-after prize at one of our games.

That July, a television reporter – with the rather unusual name of Treeboy – visited us for a feature story.

Treeboy had never heard of SpongeBob SquarePants, but wanted to bring the yellow fellow home as a gift for one of the morning show’s anchors. But he just couldn’t get the hang of that name.

“What does that mean?”

The next morning (very early) we met up again, this time at the top of ZOOMbabwe for live shots. Treeboy told me he’d brought SpongeBob along with him to a nice restaurant the night before.

“I asked our waitress if she recognized SpongeBob and she said, ‘Oh, I know who that is!'”

Treeboy looked alarmed, “I thought you’d tricked me and he was something really bad.”

That was so long ago, I guess it was understandable that not everyone had yet been introduced to SpongeBob, Patrick, and Squidward. Oh, and Eugene H. Krabs.

We dusted off this recording of Treeboy’s report:

Rest in peace, Mr. Hillenburg. Thanks for all the great laughs.