“Yep, he’s real!” is a phrase we hear pretty often here in the town of Santa Claus.

And today, hundreds of thousands of YouTubers are hearing it as well, from Rhett & Link.

At the very end of this Good Mythical Morning episode, our very own Santa statue gets a cameo:

The rest of the video is pretty entertaining as well.

I was going to mention that I’ve apparently been asleep at the wheel in not having heard of Rhett & Link before. But there was something oddly familiar about them. I wondered if they were the pair behind a hilarious commercial made for a drugstore in our neighboring town of Corydon.

So does this guy 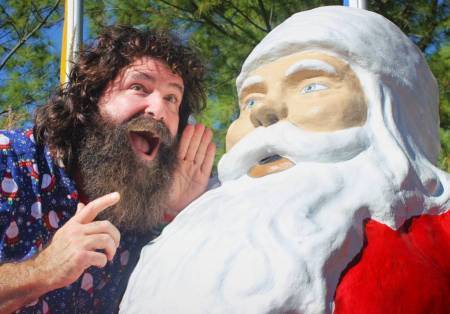 Click here to listen to Mick Foley’s 2016 podcast interview about working on his Saint Mick memoir here at the park. He’s a great storyteller!

—
Would you like to receive HoliBlog notices – along with news releases and sweepstakes – by email? Sign up here and you can choose whether to receive the emails weekly or the same day the blog posts are published. Thank you!