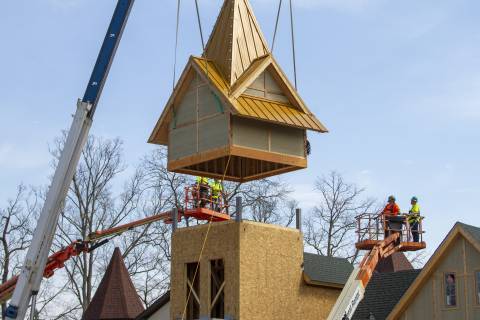 This morning, in a “topping ceremony,” a 10-story crane lifted the top half of the nearly six-story tower into place.

“In the theme-park industry, we like to celebrate placing the highest piece of a new ride or building into place,” says the park’s president, Matt Eckert. “Today’s ceremony also marks the start of the one-month countdown to the Opening Day of our 73rd season.”

Santa’s Merry Marketplace is part of the park’s investment of $5.5 million for the 2019 season, including:

Menu changes throughout Holiday World & Splashin’ Safari include a total of 110 new items, half of which are in Santa’s Merry Marketplace, which will feature Asian Cuisine, Pizza & Pasta, Deli Sandwiches, Kids Favorites, American Grill, and a show kitchen for candy making. Menus parkwide, available at HolidayWorld.com/Food, include continued attention to vegetarian, gluten-free, and allergen-friendly options.

Holiday World opens for the season on May 4 and Splashin’ Safari’s opening day is the following weekend. Season Passes for 2019 are discounted at their lowest prices through May 3. For more information, visit HolidayWorld.com or call 1-877-463-2645.
____
Released: April 4, 2019
Media Contact: Paula Werne, fun@holidayworld.com