Everything You Ever Wanted to Know About Holidays in the Sky

There’s only one show in the US that fills the skies with holiday joy. Family favorite “Holidays in the Sky” is a shimmering celebration exclusively enjoyed at Holiday World & Splashin’ Safari in Santa Claus, Indiana.

An epic feat of tech you won’t soon forget, this drone and fireworks show illuminates the night with clever animations and spectacular bursts of light.

Audiences experience a seamless, magical display but there’s a lot that goes on behind-the-scenes to bring this artistic storytelling to life. 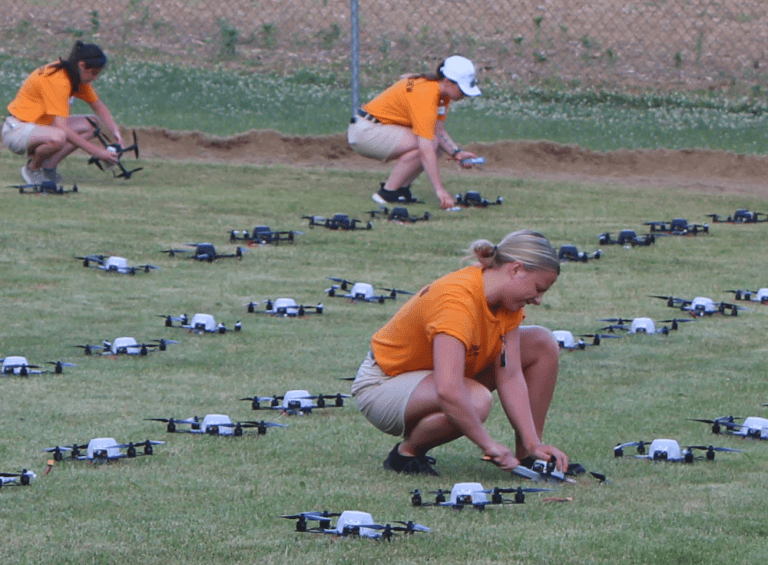 The Holiday World Flight Crew prepares the drones for Holidays in the Sky.

Wizards of the Sky

Drones are a relatively new technology in the world of sky shows. Lasers and fireworks shapes are amazing to view, but drones take light show capabilities to a whole new level. Drones are quiet, environmentally friendly, safe, and fully customizable.

Due to their ability to fly pre-choreographed flight patterns, groups of drones can be used to create nearly any image in the sky. The mesmerizing images take shape for the viewers enjoyment via the drone’s built-in LED lights.

Each drone weighs around 2 pounds. The light weight adds to their agility to create intricate patterns and shapes. It also allows them to stay in flight longer than heavier drones. 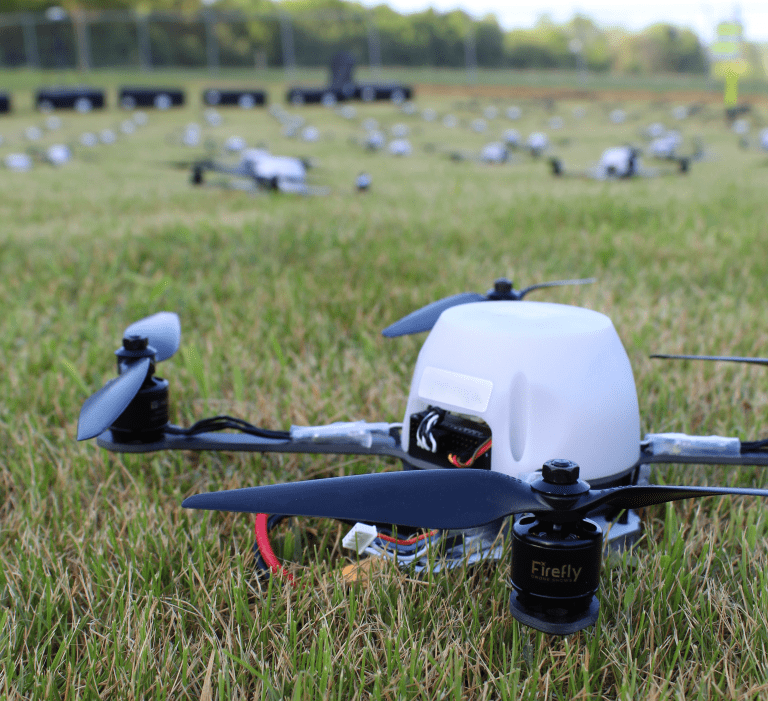 Computer software programs are used to pre-pattern the flight of each drone. This allows animators to choreograph 3-D effects and stunts during a show, viewable from multi-directions. It also allows for a single pilot to conduct the elaborate flight.

Holiday World & Splashin’ Safari teamed up with Firefly Drone Shows to produce this year’s Holidays in the Sky extravaganza. Four months of design and testing went into creating the full concept that dazzles holiday park visitors this June and July.

The park is the perfect place for a drone show. As drones, like all machines capable of flight, are governed by the rules of the Federal Aviation Administration (FAA) they have limitations including restricted flight near airfields and clear terrain.

Pilots interested in flying drones for a show like Holidays in the Sky must also obtain FAA-certification. 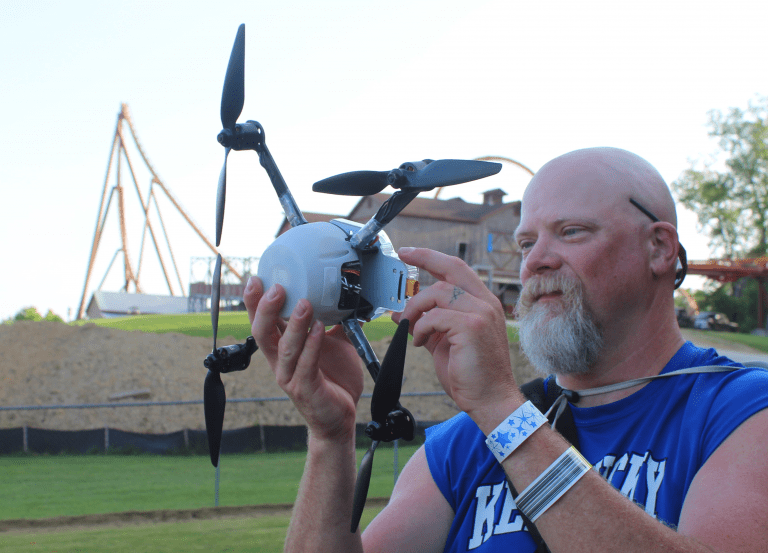 300 drones take flight each night to share the story of Holiday World & Splashin’ Safari. The drones fly up to 15 miles an hour and up 400 feet high to create their complex patterns which constantly push the envelope of night-time light shows.

The show is only limited by the flight time of the drones. Each drone can fly up to 22 minutes, making 15 minutes the magic number for Holidays in the Sky.

On a fun fact note – there’s plenty of fifteens that factor into the drone show. The drones also fly no closer than 15-feet to each other. After watching this enchanting show, you may consider claiming fifteen as your lucky number!

Synchronizing Holidays in the Sky

Holidays in the Sky is more than just a drone show. The event begins with lively dance party with the music continuing to enhance the entire light show.

There are also fireworks synced to amplify the fun factor. All of this occurs simultaneously to produce a breath-taking experience.

This all takes place with the aid of a team of 8-10 people, computer software, the park’s speaker system, electric wires, and three communication towers. Set-up each night takes 2-3 hours.

The synchronization takes into consideration weather, terrain, and park visitor safety, too. While storms may challenge the show, high winds do not. Drones can handle adjusting their flight to winds from any direction.

90-degree temps may have park-goers spending a lot of time in Splashin’ Safari, but the drones are not affected by the temperature at all. They are highly heat resistant.

Drones are also able to adjust to uneven ground easily as they don’t terrain follow. As long as the height of the ground is under their anticipated flight height, they can fly within inches from hills or trees.

At the start of the show, viewers are captivated by the Holidays in the Sky logo the drones form. This logo in the sky formation is 700-feet wide, 200-feet deep, and 400-feet high (from top of design to the ground). 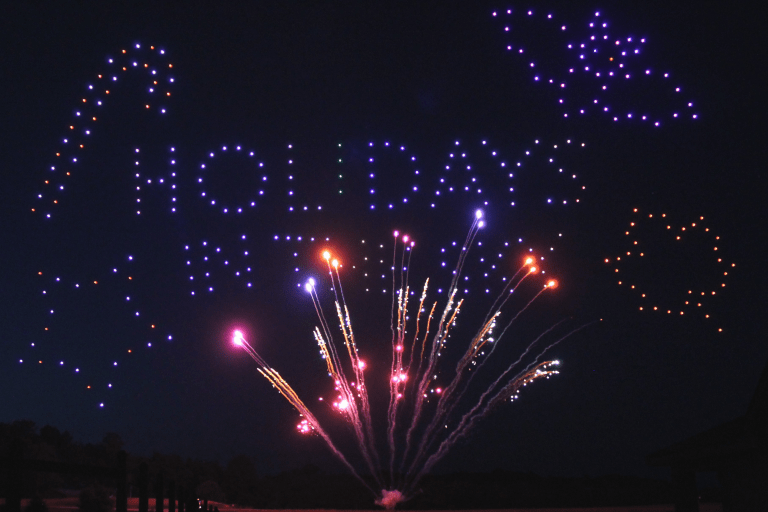 Safety is always a key issue and the drones and the drone pilot have that covered, too. Pre-flight checks are part of the set-up each night.

The flight of the drones is also constrained by a Geo-Fence which keeps the drones within its defined grid. If a drone strays from its path, the perimeter and pilot can help it land safely.

The main objective of all the behind-the-scenes synchronicity is to deliver an unforgettable awesome moment for all. A feat that everyone agrees Holidays in the Sky certainly achieves! 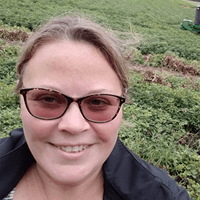 This blog post was written by HoliBlogger Barb W.

Barb Webb is a sustainable living expert nesting just outside of Louisville, Kentucky. When she’s not chasing chickens around the farm or engaging in mock Jedi battles, she’s writing about country living, artisan culture, and exploring the roads less traveled.

An award-winning author, Barb is also the Owner/Editor of the popular blog RuralMom.com where she shares her love of all things green and empowers others to live country life to the fullest. Her newest books “GETTING BAKED” and “GETTING LAID” are cheeky guides offering a fun, in-depth journey into sustainable living topics including traditional and medicinal gardening.