From photos with Holidog and Santa, to the Photo Spots, murals, and extraordinary backdrops, there are several spots around Holiday World & Splashin’ Safari to capture the perfect Instagram worthy photo.

It was hard to narrow down this list to only ten spots, especially between both of the parks. But, with the help of my teenage crew of savvy Instagramers, I’ve narrowed down our favorite spots (plus a few bonus locations!).

Remember, Instagram worthy photos don’t always have to be perfectly posed, scenic, and aesthetically-pleasing snaps. Fun, memorable, goofy, and interesting photos and locations are also worthy of an Instagram post.

Located at the entrance of Holiday World & Splashin’ Safari.

The Raven is the first roller coaster to greet you as you walk into the entrance of Holiday World. It was the World’s #1 Wooden Roller Coaster from 2000 to 2003. Even up close, a person looks tiny under those big wooden trestles.

Located next to Christmas Cupboard.

Get ready to run to Santa! Actually, walk – don’t run. Okay, so maybe not everyone was as excited about this as I was. My teenagers may have been trailing behind me and rolling their eyes over my insistence for a photo with Santa. But, who can resist the friendly Holiday World Santa? It’s one of the most iconic photo spots in the park. You don’t want to miss this! 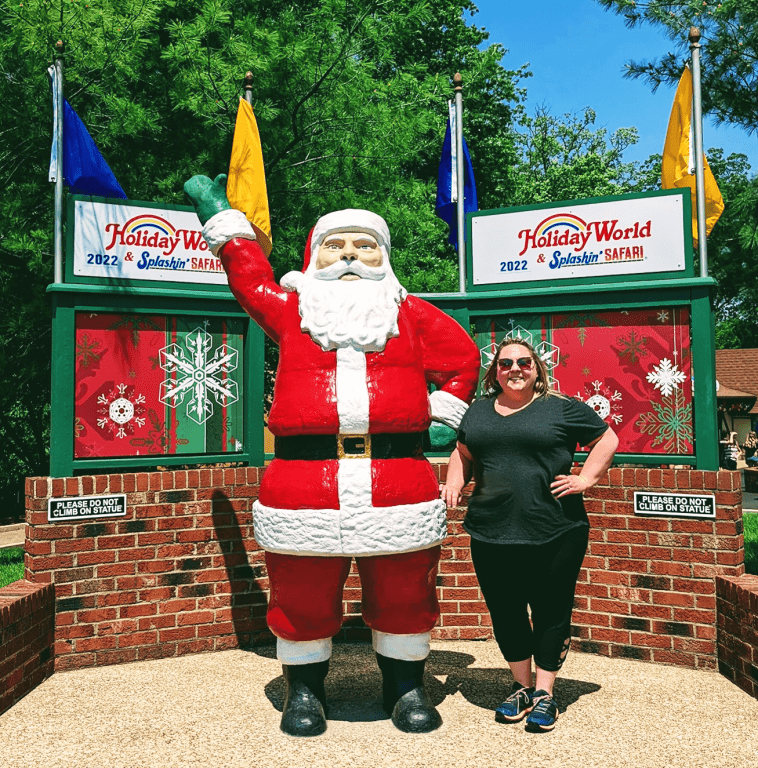 Bonus: A real Santa also hangs out in this area as well. There is a Photo Spot located inside St. Nick’s Toy Shop to snap a picture with Santa at specific times throughout the day.

Located on the side of the building next to Santa’s Storytime Theater.

If you are heading in the direction of Santa’s Merry Market, Santa’s Storytime Theater, or the 4th of July area, you don’t want to miss this snapshot. Take a photo with the “Greetings from Santa Claus Land” mural. It’s another Photo Spot in the park.

Holidog’s FunTown is a hop, skip, and jump through the 4th of July area. You’ll be quickly greeted by a larger-than-life statue of Holidog, Holiday World’s mascot. Strike a pose with Holidog while the Magic Waters splash pad springs to life in the background.

Located at the bottom of The Voyage’s lift hill.

If you time this photo perfectly, you can catch The Voyage roller coaster ascending the lift hill in the background. There is a Photo Spot located at the bottom of the hill (also a Holiday World Digital Photo Pass location). Brag about taking a ride down one of the steepest drops of any wooden roller coaster in the world.

Or just take the picture anyway to prove you were there – we won’t tell! 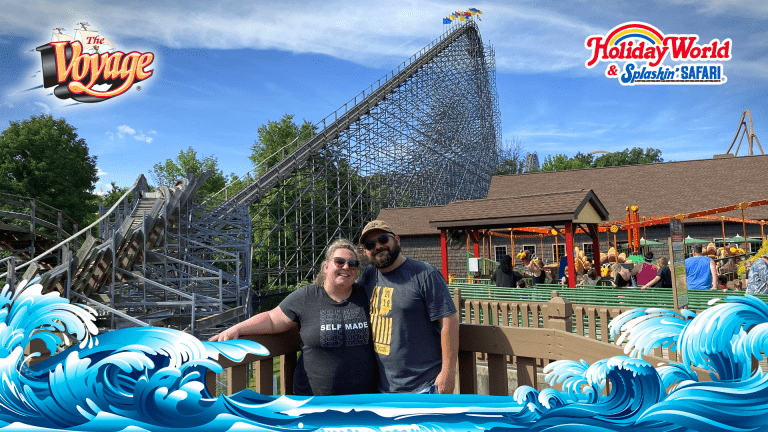 Located on the front of the Gobbler Getaway building.

Gobble, gobble. I love taking cheesy photos with my family and there is an opportunity for a few of these at Holiday World. The Thanksgiving Turkeys mural is especially great for families and is another Photo Spot location.

Located on the path to the Thunderbird and Crow’s Nest.

The nation’s only launched wing coaster is worthy of its own path. I like to call this the “Thunderbird and Crow’s Nest lane” because they share the same walking path to and from the rest of the park. Along the lane, there are several perfect spots to capture both rides in the background. It’s especially delightful at dusk.

Located in Splashin’ Safari by the Bahari Wave pool.

Climb into the giant Adirondack chair at the Bahari Wave pool. It’s great for a solo or group photo and captures the Wildebeest water coaster and Bahari Wave in the background. Look for the Digital Photo Pass Attraction sign. 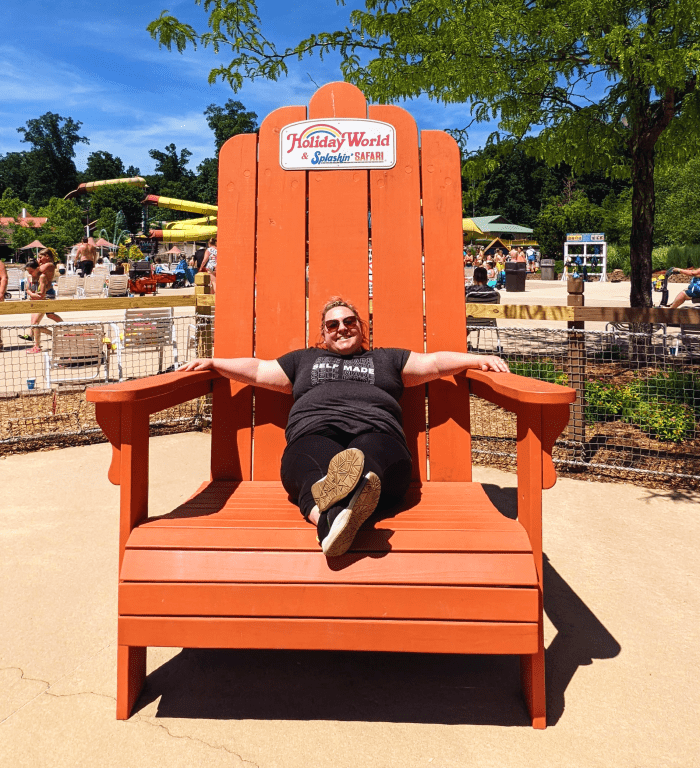 There is an observation deck at the end of the Zinga water-park ride, and it is perfect for capturing the expressions of friends and family enjoying the ride. The colorful, checkered Zinga funnel is ideal for Instagram. And who doesn’t want to brag about capturing themselves on the world’s first giant half-pipe water slide?

Located in Splashin’ Safari at the end of the Cheetah Chase water coaster.

Ride the world’s first launched water coaster and document your victory at the Cheetah Chase Champions booth. This is a fun photo opportunity we discovered after the ride, near the Digital Photo Pass Attraction area. And if you didn’t win the Cheetah Chase? Don’t worry, anyone who took the challenge of riding at “maximum curving speed and centrifugal force” is a champ. 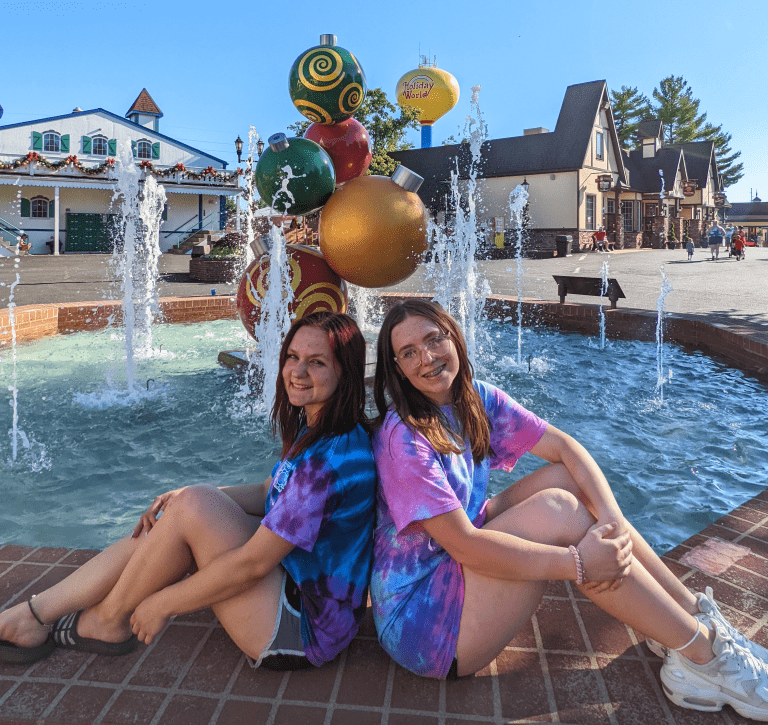 Use the hashtag #OurHoliday and tag @HolidayWorld in your photos!

Be sure to follow the adventures of our HoliBloggers this summer. Each blog post will have a sweepstakes where you can enter to win two tickets to Holiday World & Splashin’ Safari.

Entries accepted on this sweepstakes through Wednesday, July 20 until 11:59pm CDT. 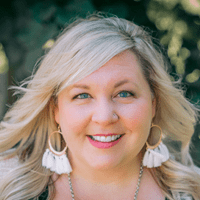 This blog post was written by HoliBlogger Jamie W.

Jamie Ward is a travel writer and published author. She founded Cornfields & High Heels, a travel and lifestyle blog, over five years ago and travels throughout the Midwest sharing her travel stories and adventures. She wrote 100 Things To Do In Indiana Before You Die and co-authored Midwest Road Trip Adventures. Jamie resides in Central Indiana with her husband, Paul, and their four teenagers. She was born and raised in Indiana and enjoys road trips, coffee, thrifting, historic places, and spending time with her family.