A few months ago, a publication I write for – Owensboro Parent – had a Kids Takeover edition. I decided to let my then seven-year-old son, Henry, write my column and he wrote the cutest and funniest article.

So, when I became a Holiblogger, I thought it would be fun to show a day at Holiday World through the eyes of Henry. I talked to him about writing a post and he was insistent on doing a ride review. So, we did!

We go to Holiday World multiple times a summer, but the visit he writes about below was exclusively for rating the rides. He also wanted me to let you all know that I typed the exact words he said and that I was not given editing powers. 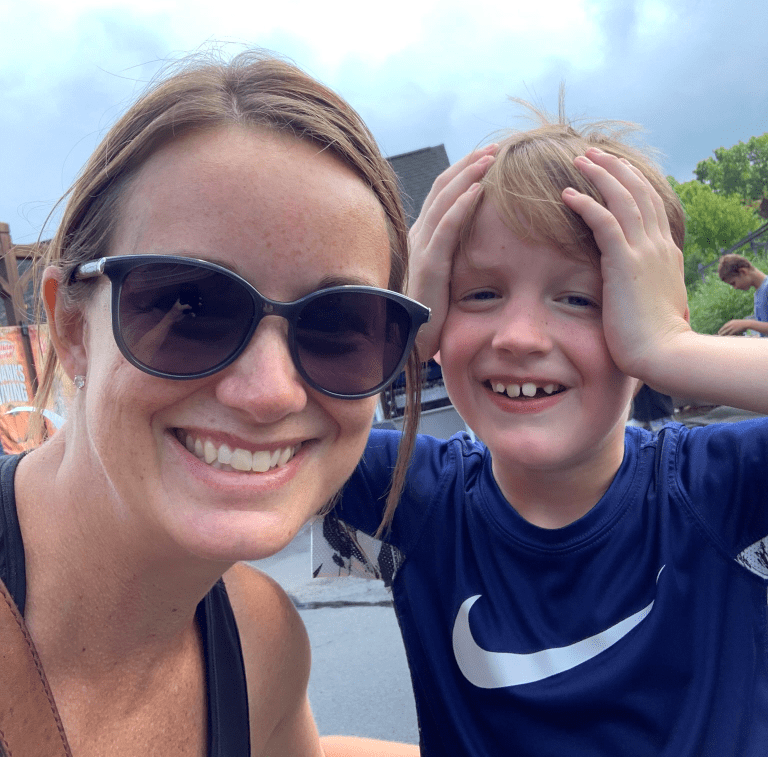 Hi, my name is Henry Johnson. I went to Holiday World even though I live in Owensboro, Kentucky. It was still very close. I go to Sutton Elementary School, and I am in second grade. I like dogs and literally any other animal that exists except a cat. My favorite thing to do is play my Nintendo Switch and my favorite game is Plants vs. Zombies.

First, I want to rate the Liberty Launch. It didn’t look that tall, but it looked really high when you rode it. Even though it was fun it made me want to barf, but I recommend you going on it.

Next, we’re rating the Turkey Whirl. It was really fun, but it made me feel like I was going to barf. Again. It was really slow in circles at the beginning but at the end we were zooming in circles.

By the way we did not go to Splashin’ Safari this time, but we went earlier this year. It was amazing. Me and Dad rode the Zinga and we were thrilled. Me and mom rode the Cheetah Chase. It was really fast and the person in front crossed their legs. We had a stranger in our boat because we didn’t weigh enough. She was really nice.

The Rough Riders bumper cars were really fun, and it was really long. When I rode, I bumped a lot of people. Two thumbs up.

At first Frightful Falls was kind of like the lazy river, but when I got up up up up it was as high as an eighth of the Voyage. And then it went splashing down the hill. I didn’t get as wet for some reason even though I was in the front, but I loved it.

The Lewis and Clark Trail looked very very fun but it was very very very slow and it didn’t have a horn. My little brother liked it though. His name is Simon. He is five. 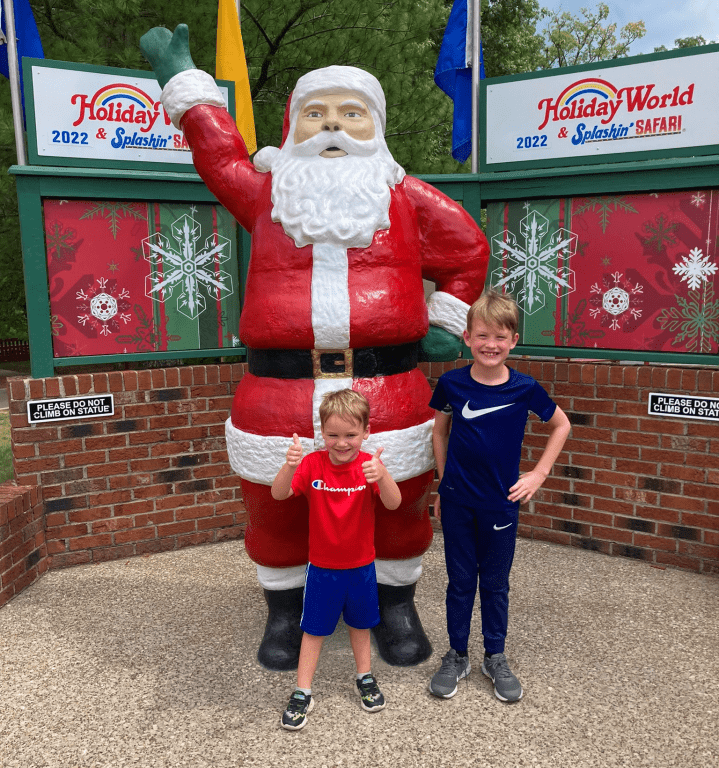 The Gobbler Getaway was really really cool and slow so you could aim at the turkey sensors. My little brother got zero points.

The Voyage was probably the most thrilling roller coaster of all time. When you went down the hill it’s like your hair will fly off.

The Raven’s hill wasn’t as high as the Voyage, but it was super thrilling and fast.

The free drinks were amazing. The first time I tried Mountain Dew was at the Oasis. It made me want to dance.

We ate at Goblin Burger after the spinning turkey ride, and it did fill me up. I still didn’t barf.

Holiday World is probably my favorite theme park. I really liked it and enjoyed the whole thing altogether. I feel like it should be one of the funnest theme parks of all time.

I hope you benefit from Henry’s ride review and enjoy his use of the word thrilling.

We love Holiday World and will be going back soon to review more rides!

Be sure to follow the adventures of all the HoliBloggers this summer. Each blog post will have a sweepstakes where you can enter to win two tickets to Holiday World & Splashin’ Safari. 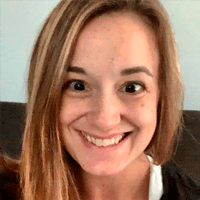 This blog post was written by HoliBlogger Jamie J.

Jamie Johnson is a blogger based in Owensboro, Kentucky. She has two sons, Henry and Simon, and a husband, Logan. Jamie works full-time as a business consultant. She loves her family, Holiday World, ham sandwiches, and Diet Mountain Dew.

17 Responses to “Holiday World Reviewed by My Son, Henry”