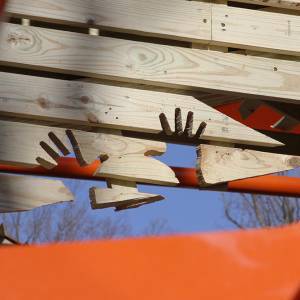 If you’ve watched our Thunderbird animation, you already know that our new roller coaster doesn’t exactly sputter to a lackluster ending.

In fact, we save not one – but two – of the most amazing “near misses” for the end of the ride. 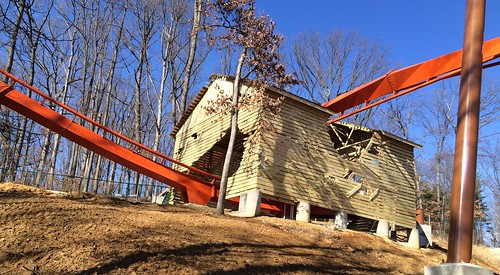 We call this our Fly-Through Barn. 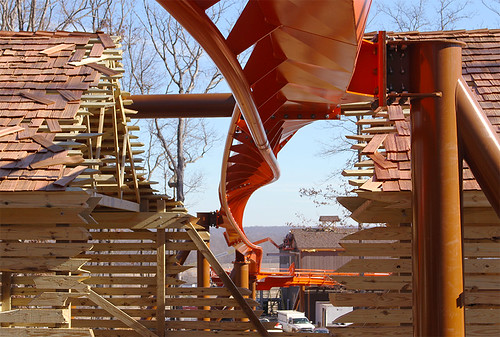 Fear not! This is perfectly safe, as VP James explains in our newest edition of the Hard Hat Chronicles:

We have a feeling this particular pair of “near-misses” will be Thunderbird’s most popular, hands down. 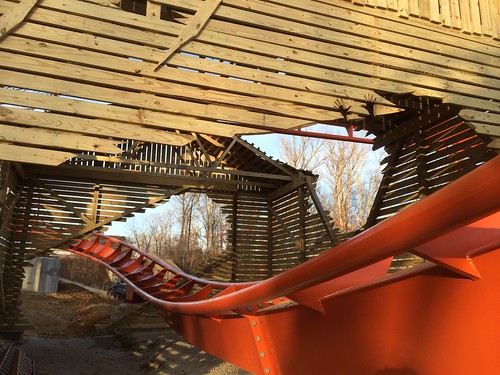 Or, rather, hands up. 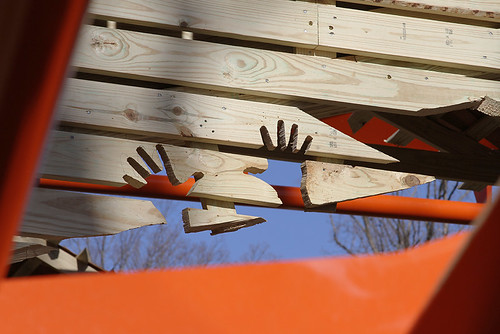 Opening Day is April 25. Can’t wait that long? Our Season Passholders get to ride the evening before. Check over here for details about our Easy Pay option, which is available through February 15.

No, we’re not referring to the Koch family, although they certainly carry a strong heritage from their Germanic ancestors.

We’re talking about something called a flywheel. 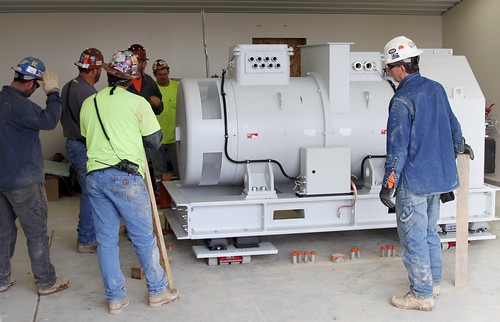 VP James explains in this edition of The Hard Hat Chronicles:

Thunderbird, our new steel roller coaster – the first launched wing coaster on the continent – opens April 25, just 77 days from today. Oh, you prefer to ride in 76 days? Be sure to line up some Holiday World Season Passes for you and your family and you get an invitation to ride April 24. And if you’d like an easy payment plan, but sure to get started in the next week, as our Easy Pay option goes away after February 15. Make your launch plans now! 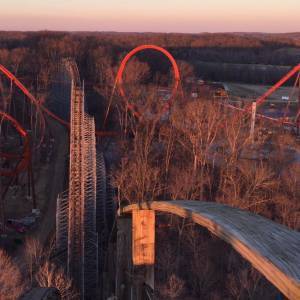 The late afternoon sun was magical. 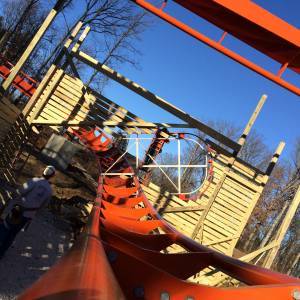 One of the most  common questions we receive when we add a new roller coaster is, “How tall do you have to be to ride?”
And then a few also ask, “How tall is too tall?” 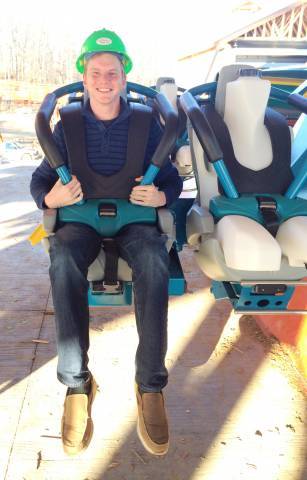 He’s on the high end of the measuring stick.

Andy is one of our four Attractions Managers. He was sweating it for a while when we announced Thunderbird.

… because he loves roller coasters and could hardly imagine coming to work every day without being able to ride our new steel coaster.

And oftentimes in between.

Oh, and there are all sorts of “near misses” along Thunderbird’s flight route. You know, like the tunnels on The Voyage? Where you know that there’s plenty of room, but still instinctively duck your head as you careen toward it?

You already know about Crow’s Nest. And Thunderbird’s dance with Voyage. 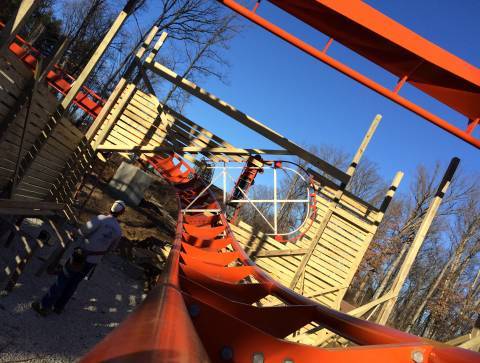 And it’s under construction as we speak.

We’re an efficient bunch, so we use it twice. Thunderbird will “crash” through this barn a-comin’ and a-goin’.

It will be awesome.

Where is it located? Right across from one of Voyage’s tunnels. 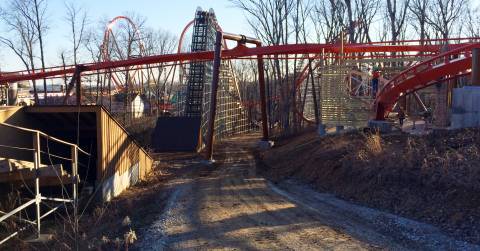 Stephen said it felt like Voyage was photobombing Thunderbird today. 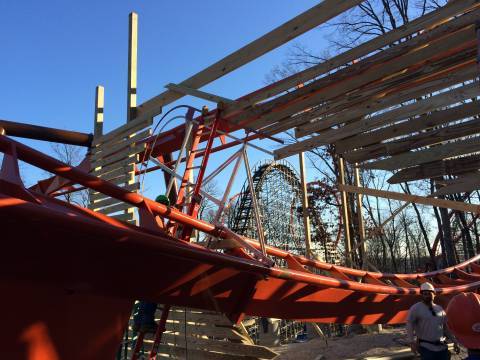 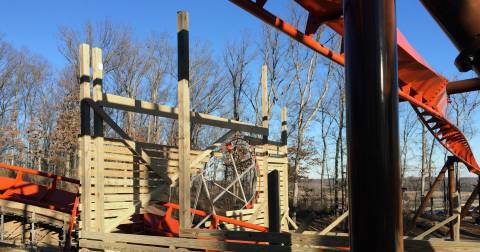 Meanwhile, how is beanpole Andy doing? Will he get to ride? (And will he forgive me for that beanpole crack?)

Yes! As long as he doesn’t grow any more – and rides Thunderbird without shoes – he should be good to go. All 6’6″ of him.

Here’s our entire Out To Launch Bunch, Attractions Managers Andy, Jennifer, Lori and Alex. Just hangin’ around, ready to ride …

It doesn't matter how long our Attractions Managers sit there, Thunderbird isn't quite ready for riders yet! pic.twitter.com/kzznZK2uQS

Back to that earlier question about minimum height to ride Thunderbird roller coaster? Riders must be at least 52″ tall, which translates into 4’4″.

We’re at T-minus-96 in our daily countdown. And the excitement is mounting!

There’s something about test dummies. 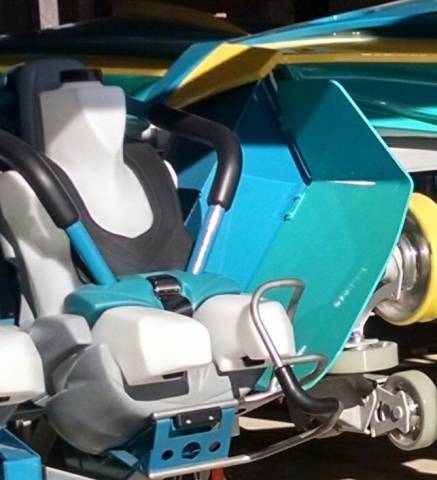 Thunderbird will have two trains. One is here already and the other will arrive next month.

Testing begins in February, but the dummies don’t care. When you want a front seat for the first launch, you don’t mess around. You make arrangements to be available.

With just 98 days till Opening Day, these dummies are ready to ride! #Thunderbird pic.twitter.com/Dwu1Ie3uFR

To answer the many questions about how we’ll choose the first riders for our Media Preview Day (yes, we’re already hearing from reporters and news crews wanting to broadcast live that day), we will launch an online auction in the coming weeks to determine those lucky riders and raise funds for a great cause. Details to come!

Thunderbird opens in 100 days. Sleep now, for once this mighty bird spreads his wings, there will be no rest. pic.twitter.com/YtdrSEAYDL

And in 100 days, Thunderbird fugit.

Launchtime is quickly approaching … who’s starving for a ride?

Season Pass discounts are at their deepest right now – and expire this Thursday at midnight (January 15). So if five hours of Thunderbird roller coaster rides, along with The Voyage, Crow’s Nest, Mayflower, Turkey Whirl, The Raven, The Legend and more sound like your kind of Friday evening, be sure to get your Season Passes now. Our new Easy Pay option? Thanks to those who suggested it – the monthly payment plan is a big hit! 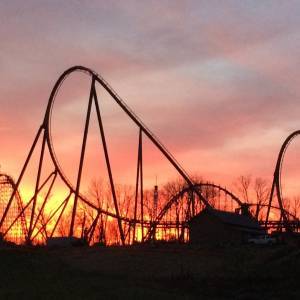 … but she sure can deliver some cool sunsets!

Thanks to @HolidayWorld for this picture of tonight's sunset! Have a photo? Send it to reportit@wishtv.com! pic.twitter.com/JcF0xFKL8K

Yes, indeed, Orange is the New Track … as was the sky around Thunderbird. 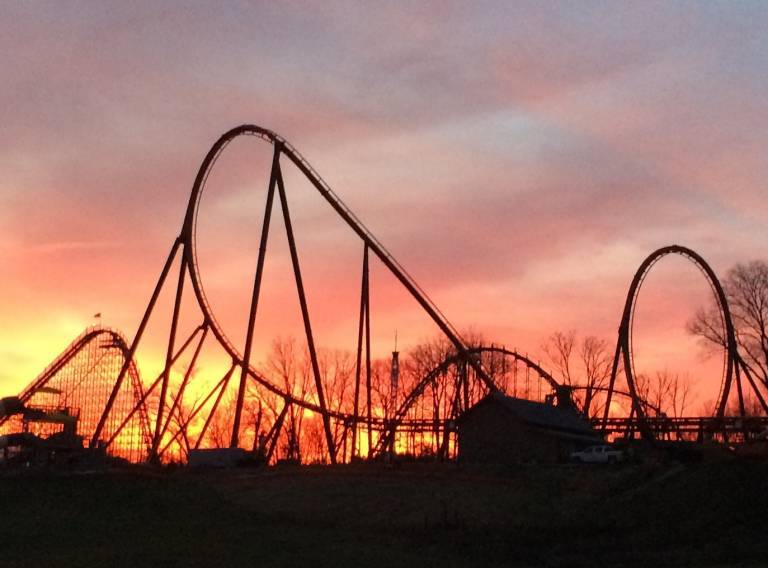 Voyage is certainly in the pink this evening. 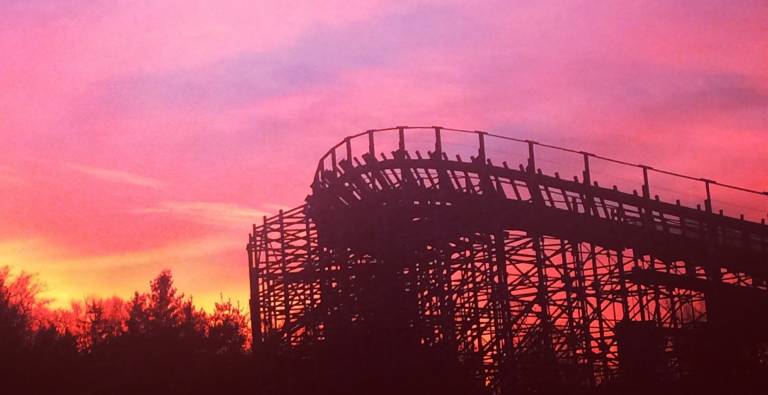 Stay warm! April 25 is not that far away!

This time of the year, it’s before dawn.

That bright orb in the photos below? It’s the moon.

Jason was facing west to take these photos, so he wasn’t shooting into the sun. (He’s also a trained – and enthusiastic – weather spotter, so he knows his sun from his moon and his east from his west.)

Riding Voyage and Thunderbird by the light of the moon? That will be increasingly possible this season; just check our 2015 Hours. 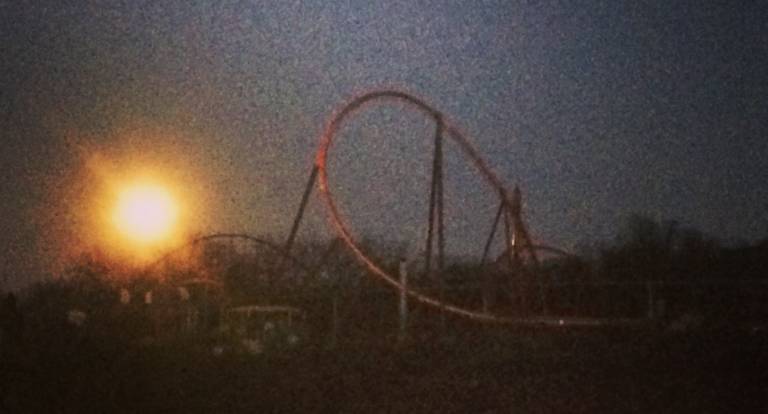 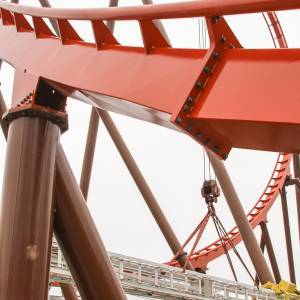 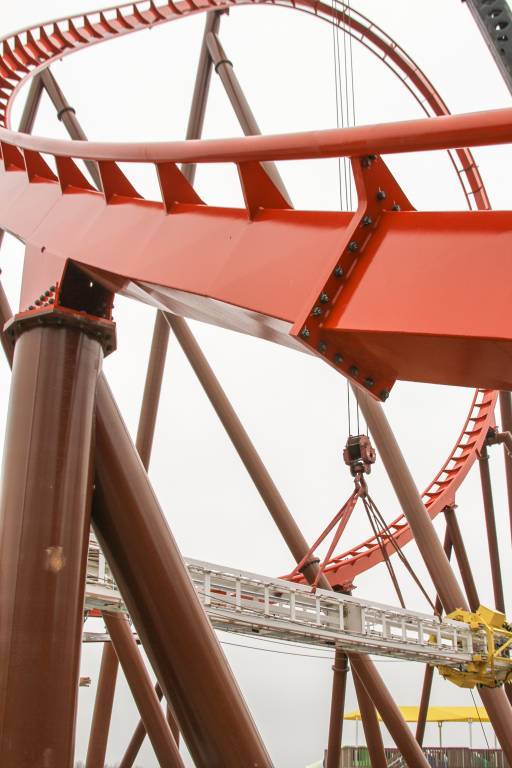