Posts Categorized: Behind the Scenes

Home // Archive by Category "Behind the Scenes" (Holiblog - Page 7)

Whenever we talk about cabanas around here, it’s not long before someone starts humming, whistling or even singing Copacabana.

And then it’s one of those stuck-in-your-head earworms that last for at least the rest of the day.

So when I saw this photo from Nathan’s recent walk around the park, the tune exploded in my brain, with slightly new lyrics … “At the Coaster – Coaster Cabana … the hottest spot in Indiana!”

We’ll have the new cabana-location map on our website in another month or so; cabana reservations will be available online starting in March.

And yes, that song is still stuck in my head. Even now.

Anyone else spending a considerable amount of time this week grumbling about the frigid temperatures?

When you see it’s one degree outside, it’s hard to respond in a cheerful way.

Math question: When the temperature goes from 4 to 5 degrees, did it just get 25% warmer?

So when we heard that our Mammoth boats are heading to North Carolina for some rest and relaxation, we nearly had a riot on our hands. Paul, Michael and Mike packing up the Mammoth boats.

No fair! Why the trip to warm and sunny North Carolina? And why can’t the rest of us go?

Did you know our Mammoth boats aren’t just inflated rafts? They each have a 200-pound steel plate in them.

That’s because of the linear induction motors (LIMs) which propel the boats magically up the hills (gravity takes care of the downhill portion). This is a greatly oversimplified explanation, but the push up the hill is produced by magnetic forces. So the LIMs in the Mammoth flume use massive magnets to give the steel-plated boats a smooth but powerful push up each Mammoth hill.

In North Carolina, inspectors will check each boat and provide any TLC they may need to get them ready for this summer.

Because summer really isn’t that far off … right?

Don’t get me wrong, we’ve had some great staff meetings over the years. That’s when we all learn about “what’s new” for the next season and get updates about staff promotions and such.

But it will be mighty hard to top today’s meeting.

We gathered in the HR Lobby at 9:30 this morning and were invited to board this bus: It was snowing quite enthusiastically at the time, which added to the festive nature of this surprise mystery trip.

We headed north on Highway 162 through Ferdinand to Jasper.

To the movie theater in Jasper. For some reason, there weren’t any movie posters on the inside of the theater, so I dragged those who were last in line for popcorn and sodas outside in the snow and wind for a quick photo.

Then we hurried back inside to join the rest of our already-seated staff.

Saving Mr. Banks? A wonderful movie – and a heartfelt reminder that you never know how a person’s childhood has impacted that person’s view of the world.

And that our world is a sweeter, kinder place thanks to Mary Poppins, P.L. Travers, and Walt Disney. 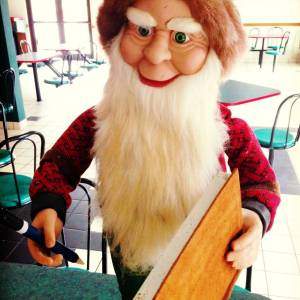 This summer, when you drop by Kringle’s Kafé for a pizza, glance up to see this fine fellow in the overhead decor.

But when the uninformed happens upon him during the off-season, perched on a table near our free Pepsi fountain, it’s more than a little startling!

Okay, up until about three years ago, I’d never heard of this phenomenon.

Wikipedia explains it at great length, if you’d like the whole story. In brief, it’s faking someone out by sending them a link to a great video. But no matter what you promised, you’re sending them this:

Guess I should have warned you, this song will give you an earworm like none other!

Anyway, about three years ago, Eric sent me a link to a video he thought I would really enjoy.

At first, I thought he’d sent me the wrong link. “Never gonna give you up”? I don’t think so …

What are you talking about?!

This went on for quite a while. When Eric finally convinced me this was a real “thing,” I promised to myself that some day there’d be an eRicRoll.

And today was that day.

In short, we were making decisions about priorities when discussing a project with an outside vendor. One item in particular was tabled for later.

“One less hill to climb” was a phrase used at the end of the conversation.

“One less egg to fry,” I added, hoping Eric was familiar with the classic Fifth Dimension song from the ’60s.

Oh, you don’t know that song? I’ll send you the link.

I really intended to, too. But suddenly I remembered that promise I’d made to myself so very many years ago. A little bit later, Eric called me (I guess I should mention that he’s now my boss): “I can’t believe you Rickrolled me!”

I believe I detected more than a hint of admiration in his tone.

Nathan nearly fell out of his chair laughing. He had just started working here when the original Rickroll occurred. LaurenR, well she didn’t know what we were talking, laughing, or singing about.

But she does now, poor thing.

I didn’t end there. I took my glee to Twitter:

@HolidayWorld congratulations. Never give up!

That’s pretty cool when the folks at the State Tourism office join in the fun.

As this day rolls down, we leave you with the following sage advice from the man of the hour: Final note: I know this video is from 1987. But I have to ask … is Rick wearing Mom Jeans? 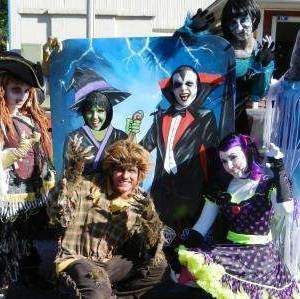 Happy Halloween Weekends may be over for another year, but we still have some stories to tell and photos to share.

Our Graveyard Smash zombies took a walk on Sunday to enjoy a bit of fresh air.

They even posed in some of our Halloween photo cut-outs. And now we add the rest of the lovelies to our souvenir photo. Before heading back for the next show, Zombie Lauren (the un-living doll) had a thirst for … a soft drink.

Whether you’re batting your eyelashes or batting for the World Series, we wish you a safe and fun Halloween!

Any French majors out there?

One of the first words students learn in French 101 is “queue.” That’s because it’s a French word commonly used in English as well.

It’s a massive overuse of vowels, as the word is pronounced simply “Q,” just like the letter.

Anyone who’s worked with me over the years knows one of my twitchy bugaboos is the use of the redundant phrase “queue line,” because queue is the French word for line.

The uninitiated among us can always tell construction of a new water slide is moving along when the giant pieces of fiberglass move from the initial just-off-the-truck position (as in the foreground of the photo below), to the assembly queue. One by one, the fiberglass pieces are matched up and bolted together. There are some footers visible along the right side of the photo below. Before long we’ll be “swinging fiberglass” from the assembly queue to their permanent position as part of Hyena Falls’ four slides. Interested in the construction process? Be sure to check out our live ConstructionCam to catch all the action. 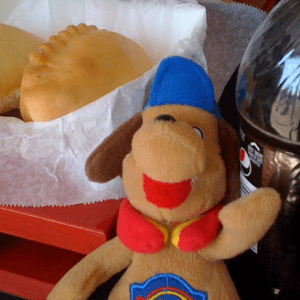 Not sure the pup understands this whole football thing. Right before he and Eric left, I got the impression Holidog was expecting to visit the World’s Largest Dog Food Bowl.

Eric says security is very tight (and he forgot to bring Holidog’s shot records), but he’s hoping Holidog will be allowed in to cheer on the winning team. 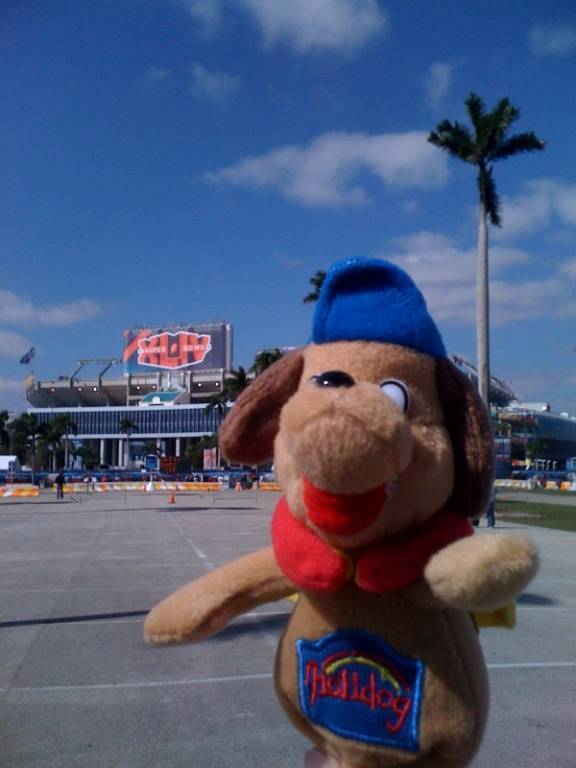 Update: Holidog made it up to the front gate and was greeted with — free Pepsi! (Nice to know this free Pepsi thing is catching on.) 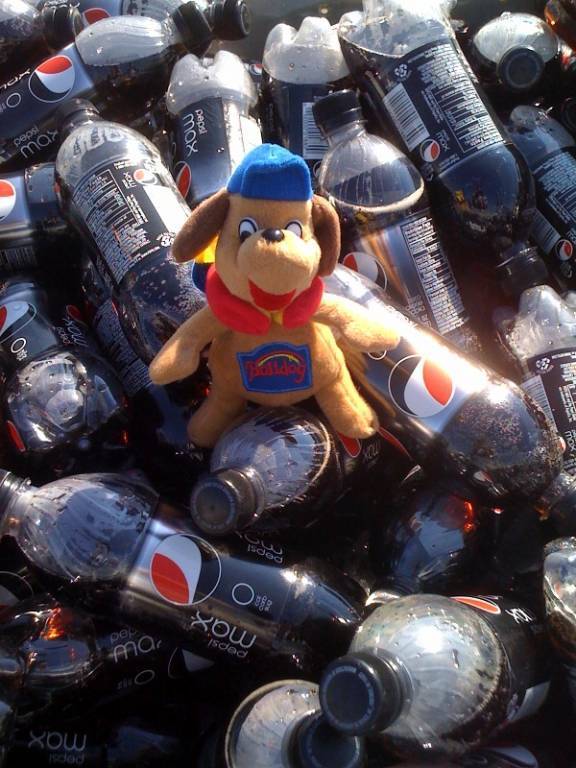 He and Eric will also be snacking on empanadas for lunch. 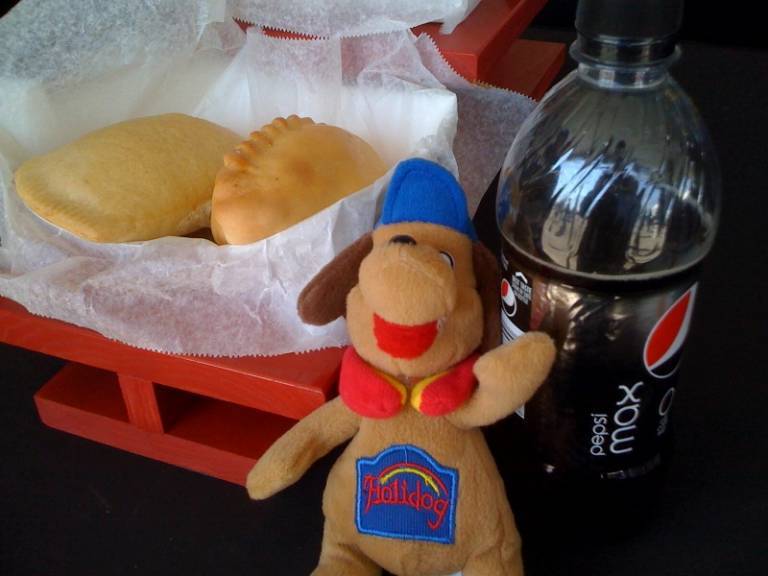 Another wonderful surprise — there are rides at the Super Bowl! 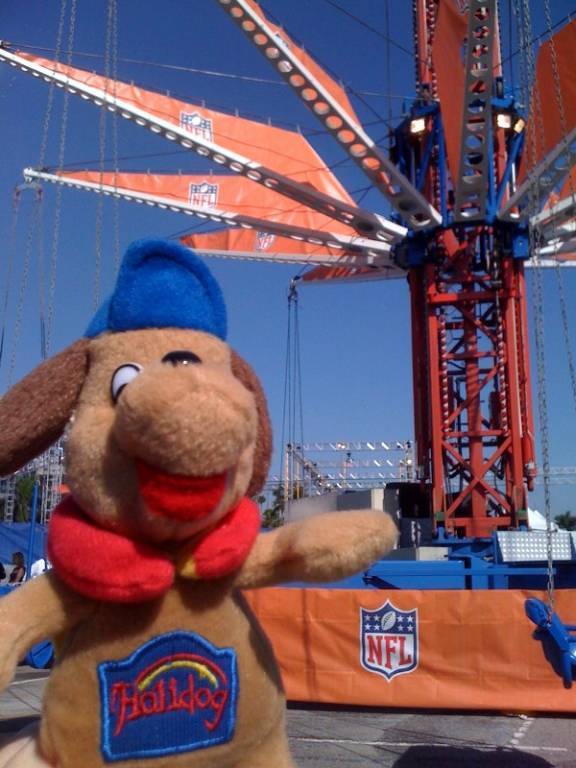 Update: What a game! And what a half-time show! Holidog happily howled along with Pete and Roger. 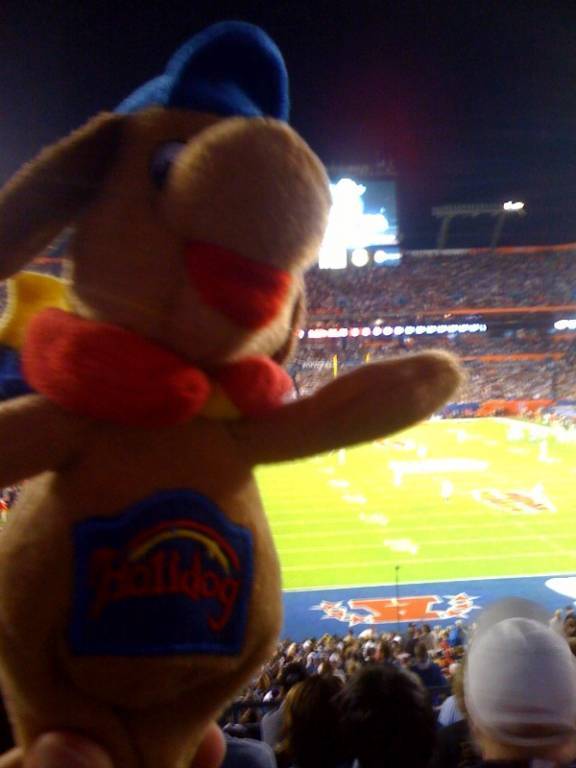 … the HoliPixie appears in the park!

Distantly related to the Tooth Fairy, the HoliPixie flitters about–checking lights–to make sure we don’t waste any electricity.

We recently caught the HoliPixie on our security tapes …

The HoliPixie, it turns out, will be house-sitting for Santa at the North Pole soon, so we’re hoping this video will be enough to inspire all of our employees to remember to switch off lights when they’re not needed.

(And now that we know that creature is out and about, we’ll also be sure to lock our doors — and windows!)

As we get closer to opening each season, John keeps busy writing and producing our ad campaign.

For editing our “creative,” he travels to Cincinnati. He was there a week or so ago and was delighted when, while at lunch, he looked out the window and saw this on the back of a Pepsi truck: John approached the Pepsi truck drivers and asked, “Hey guys, can I talk to you for a minute?”

Priceless response: “Uh … what did we do?”

John happily emailed me the photo with the Pepsi guys, quipping: “Kings Island may have Diamondback, but we’ve got Truckback!”