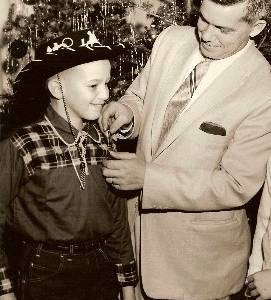 Thanks to Hilton for emailing me about an interesting story from our Santa Claus Land days.

Hilton won a nation-wide contest. His prize? He was named Town Marshal of the town of Santa Claus for the entire year of 1959. 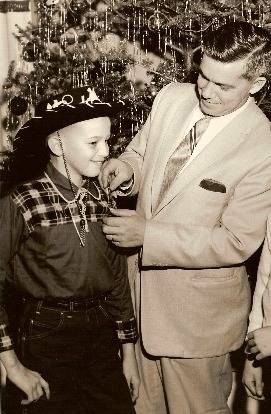 Well, lookee here … Jerry, our archivist par excellence, found a photo and some articles about Hilton:

According to newspaper articles from December 1958, the Santa Claus Chamber of Commerce held a nationwide contest. The search was on for children who had been born on Christmas Day.

The two winners were Hilton, from Mount Vernon, Indiana, and a lad named Michael from Hastings, Minnesota.

Brace yourself for the headline that showed up in Michael’s local paper:

Michael, on the other hand, was named Mayor of Santa Claus.

I think Michael was a tad jealous There’s a rather poetic quote from Hilton in the newspaper article.

During his weekend in Santa Claus, he invited all those he met to “visit Posey County, home of the famous watermelon patches, and where the Ohio River blows a breeze of freshness.”
___
Would you like to receive HoliBlog notices – along with news releases and sweepstakes – by email? Sign up here and you can choose whether to receive the emails weekly or the same day the blog posts are published. Thank you! 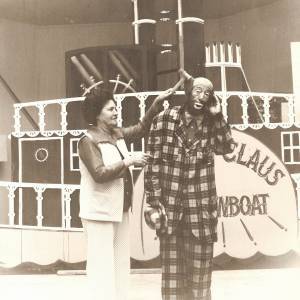 … Illinois, that is. Here’s what an email from Mike had to say:

I just wanted to let you know how much I enjoy reading the articles you post on the HoliBlog site.

I have visited Holiday World & Splashin’ Safari every year since 1979 when my grandparents would bring myself, my brother, and cousins every summer. Now I have made it a family tradition of my own and bring my child every year. I could probably walk through the park with my eyes closed and know exactly where I was just by the sounds of the rides. Keep up the good work and tell Mrs. Koch I think she looks as good in person as she does on TV. Every time I have visited the park I always see her greeting guests and helping to keep the park clean. You all deserve a huge round of applause for providing such an enjoyable experience to everyone, young and old. I look forward to another wonderful visit in July of this year.

PS – I was just curious, I believe back in the early ’80s, prior to the Hoosier Celebration Theater, there was another theater behind Mrs. Klaus’ Kitchen. There was also a play area with I believe a rocket-shaped slide. Has all this been removed? I always try to peak through the fence to catch a glimpse but have never been able to see anything.
———————

I forwarded Mike’s email to Will Koch, who remembers that area well. He is correct. The theater was called the Showboat Theatre. (It was originally built for the Santa Claus Land Children’s Choir.) That was where Happy Kellems (the clown) and Gene Smith (the tap dancing magician) performed. There was also a country show there in some years. The theater was where the pole building that houses the carpenters’ shop supplies is now. There was also a rocket-shaped kid’s slide that was located literally right where I now park my car.

Happy Kellems (that’s his wife and partner, Lillian, bonking him on the head) was a popular clown at Santa Claus Land. We’ll have to talk more about him in the coming months and years. During his long career, Happy performed for presidents, with Gene Autry and Roy Rogers, and for families at Santa Claus Land.

For now, here’s a Happy quote from a 1979 newspaper article:

“The most important this is to bring as much laughter and happiness as you can to a tired world that needs laughter.”