Words to describe our industry:

Nosy? Oh, heck yes! We just love to visit each other for a peek behind the scenes.

Or, in this case, our friends from Raging Waves Waterpark near Chicago, took a peek behind the water curtain. That’s our water-park attractions director, Lori, on the right. She says we should have busted out our free sunscreen – everyone was a bit sun-kissed by the end of the day.

It’s so nice to see blue skies again – opening day is less than eight weeks away!

The “name game” sounds like loads of fun, doesn’t it?

Believe it or not, it can be an agonizing process!

You start out with the theme of the park section, add details about the ride or slide (or, in this case, restaurant), and then start churning out ideas.

You generate long lists and then start to cull.

You search online to make sure this isn’t a name already in use. Does it rhyme with a naughty word – or if it can be shortened, is the nickname G-rated? Will it sound good in commercials and will park Guests remember the name?

Splashin’ Safari names have been particularly interesting, as we try to stay with a safari theme. We’ve used safari references (such as Jungle Racer and Hyena Falls), Swahili words (such as Bakuli, Bahari and Zinga) and we even made up a word: Watubee.

The safari animal name Wildebeest was tossed on the table year after year. By me. Time after time, it was scratched off the list early on in the process. It got to be sort of a joke; whenever we needed to name anything (including staff members’ children and grandchildren), someone would suggest Wildebeest and everyone would have a good laugh.

As you know, eventually everyone else warmed up to Wildebeest and our first water coaster was named after that stampeding safari animal. (Which, looking back, was even more fitting than we could have dreamed; have you ever seen the stampede toward Wildebeest when we “drop the ropes” at park opening each morning? Lori (our water-park attractions director) and her staff had to institute a “pace car” entry to keep eager riders from running and pushing.)

Wildebeest debuted in 2010. Fast-forward to present day and F&B Jason challenged his management team to come up with a few good names for Splashin’ Safari’s new restaurant.

Since Wildebeest was the late Will Koch’s final ride project, Jason suggested the water coaster as a starting point for ideas.

There were some great suggestions: Wildebeest Feast and WildeFeast. Then Wildebeest Bistro.

Suddenly, Katie S. came up with a combo: And what else will be on the menu, you ask?

Wraps! We’ll have a Chicken Bacon Ranch Wrap, a Hummus Wrap and a Black & Blue Wrap (that’s foodie code for roast beef and blue cheese – I got to sample one last week – scrumptious!).

Side dishes will include Corn on the Cob, Fresh Fruit Cups, and Steak Fries.

And, yes … brewed sweet tea as part of our free soft drinks offering.

And what will Wildebeestro look like? Here’s the designer’s rendering:

Here’s a closer look at the wildebeest carvings on the posts out front: And here’s a side view:

And exactly where in Splashin’ Safari is Wildebeestro located? We sure hope you’re as excited as we are about the new restaurant and new menu items. We expect Wildebeestro to open in time for the Memorial Day Weekend.

And if you’d like to help us with another naming project, be sure to enter this contest by Tuesday, March 11 at 10am CDT.

Here’s this week’s #TransformationTuesday photo from Instagram, showing how construction is moving along on our new restaurant in Splashin’ Safari.

It’s a little chilly out, but … if you insist:

Believe it or not, we have a super bowl tag here on the HoliBlog.

Who turned down the heat? Mammoth water coaster is a snow coaster after today’s flurries!

Were snowflakes flying in your neighborhood today? They were swirling wildly for a while here in Santa Claus.

Two years ago this week, it was Mammoth fiberglass that was flying. We thought this would make a fun #FlashbackFriday photo. A flower pot on the head and a pink “grass” skirt.

But one person’s flower power is another person’s …

But there’s plenty of attitude. My seven-year-old just hollered, “Are you out of your mind?!” to his teacher.

Swim teachers, to be precise.

They laughed and encouraged James to try.

And off he went, paddling away. Still “beating up” the water too much, but a vast improvement from a week ago.

Some of the Splashin’ Safari lifeguards are teaching swim lessons this summer.

Somehow we lucked out with our schedule, and James has his own private swim tutor. 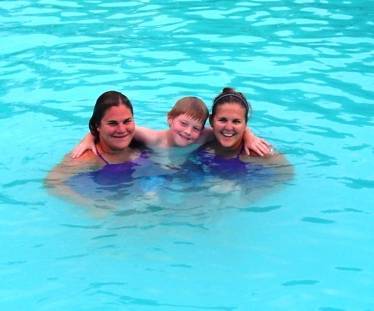 That’s Jennifer on the left and Leah on the right. James likes Jordan, too, who has conducted a few of the lessons.

Jordan passed along a conversation he had with my son the other day:

James: Jordan? May I ask a personal favor?

James: Would you please call it my bottom instead of my butt?

Bless Jordan, he has complied with the rather Victorian request. “Come on, James — keep your bottom up! Breathe through your nose! You can do it!”
___
Would you like to receive HoliBlog notices – along with news releases and sweepstakes – by email? Sign up here and you can choose whether to receive the emails weekly or the same day the blog posts are published. Thank you!