The Legend of the Thunderbird

In the fall of 1620, the Mayflower set sail for the New World. As 102 passengers crowded on board the Mayflower in September of that year, they were six weeks behind schedule and had missed the more favorable weather conditions of the summer months.

During the second half of their long voyage, stormy weather forced them off course by hundreds of miles. The stress from the windy storms caused the massive beam which supported the mainmast to crack.

After 66 days, the passengers and crew feared all was lost, as their ship nearly capsized in the seemingly endless storm. Suddenly, an enormous bird, more powerful even than the sea and storm, appeared from within the dark and churning clouds. This creature’s massive wings cut through the air with such great force that thunder filled the skies. The thunderbird’s pounding wings reached tremendous strength; the power of its thunder launched the Mayflower to the New World.

Explore all 66 Days at Sea: 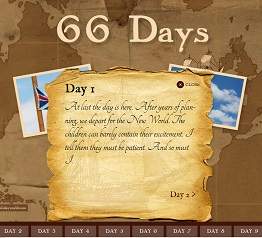